Pandemic might be seasonal, but that doesn’t mean it’s going to disappear this summer

As cases of COVID-19, the disease caused by the novel coronavirus, rapidly increase in the United States and other parts of the world, epidemiologists and other researchers are urgently trying to learn more about the pathogen involved. One question that some virus specialists, and some meteorologists, are asking is whether there may be a seasonal aspect to this outbreak.

In other words, is this more like the flu, which has a distinct winter peak in the United States and Europe and then ebbs for the spring and summer? Or is this here to stay at a high level of spread throughout the warm season?

A new study, which has not yet been peer-reviewed, shows that the novel coronavirus has been spreading most readily along an east-west band of the globe where the average temperatures are between 41 and 52 degrees and average humidity levels are between about 50% and 80%.

The study, by researchers at the University of Maryland and in the Middle East, hypothesizes that the most at-risk cities in the coming weeks could lie just north of the region that has been most heavily affected to date as milder temperatures gradually move north.

However, that assumes that the correlation with weather does in fact reveal something fundamental about the new coronavirus’s transmission, which is highly uncertain.

“Although the current correlations with latitude and temperature seem strong, a direct causation has not been proved and predictions in the near-term are speculative and have to be considered with extreme caution,” the paper states.

Mohammad Sajadi, a study co-author and a professor at the University of Maryland’s Institute of Human Virology, said the hypothesis that this virus exhibits a seasonality is based in part on the behavior of other respiratory viruses in temperate climates, as well as the lack of major COVID-19 outbreaks in countries south of China, where travel patterns suggested the potential for largescale spread.

“ Any time you’re dealing with a transmission event, there can be many potential variables, but sometimes one or (a) few variables are key,” Sajadi said via email. “We hypothesize that average temperature is one of them.

The main takeaway from the study, and the reason we are disclosing it early, is that, if validated by the scientific community, it would be potentially useful in ongoing surveillance efforts.”

Judging by how the virus may have responded to temperatures so far, the study suggests areas just north of its current zone may be most vulnerable through April, including over the Midwest and Northeast United States, Central Asia, Eastern and Central Europe, and the British Isles. After that, it may find more of a foothold farther north in less-populated areas.

Separately, Jupiter, a company that predicts risks from severe weather and climate change, has been analyzing transmission rates of the coronavirus in recent weeks and trying to find relationships with temperature. Jupiter chief executive Rich Sorkin has found some evidence that transmission rates are highest in countries with recent maximum temperatures below 68 degrees.

Sorkin cautioned that growth rates, however, were probably influenced by multiple factors, not just temperature, including importation of cases from infected countries, public health policies and infrastructure.

Epidemiologists warn that so little is known about this coronavirus that it’s impossible to predict the course of the epidemic on the basis of weather or climate factors alone, and in fact, available evidence suggests that the virus can spread easily in warmer climates, such as Singapore’s.

David Heymann, a professor at the London School of Hygiene and Tropical Medicine, said there are two main reasons the coronavirus could exhibit some seasonality.

One has more to do with human behavior, because people tend not to be in confined spaces for extended periods during the summer. This could somewhat hinder the spread of the virus.

The other reason, which is more of an unknown right now, has to do with the virus itself, specifically its transmissibility in different seasons.

“No one knows” the transmission characteristics of this virus, Heymann said in an interview. “Certainly out here in Singapore, it transmits without any problem.” Singapore has had active community spread of the virus, but the government implemented policies including social distancing to stem the outbreak, with apparent success.

Heymann said no one has yet shown a seasonality to the coronavirus that is due to characteristics of the virus itself.

Studies have shown that the common flu virus has a seasonal aspect in the northern mid-latitudes, tied to humidity levels and temperature, among a number of variables.

However, Heymann said that does not mean the spread of the novel coronavirus also will decline by early summer.

“The one thing that’s clear is that this, at present, is not showing the same characteristics of influenza,” he said. In general, however, Heymann said, respiratory infections do tend to decline in the summer, but that there has not been a proven seasonality involved with two other major coronaviruses: SARS and MERS.

In a preprint of a study published on the medRxiv website that is pending peer review, a group of researchers, including the epidemiologist Marc Lipsitch of Harvard’s T.H. Chan School of Public Health, examined the coronavirus outbreak when it was mostly limited to China. They found that it exhibited the potential for sustained transmission and exponential growth rates across a range of temperature and humidity levels in China, from tropical areas to cold and dry sections.

“Our results suggest that changes in weather alone (i.e., increase of temperature and humidity as spring and summer months arrive in the North Hemisphere) will not necessarily lead to declines in case counts without the implementation of extensive public health interventions,” the study concludes.

Jeffrey Shaman, the director of the climate and health program at Columbia University’s Mailman School of Public Health, said that the novel coronavirus may exhibit a seasonality but that this is far from clear.

“Given that it is a newly emerged virus to which most of the world is susceptible, I don’t think it will abate in April. Rather, it might ramp down in the U.S. in late May or June,” he said via email. “A similar pattern has been observed with pandemic influenza. Due to high susceptibility, the pandemic virus continues to circulate through late May or June, is limited in summer, and ramps up again in September.”

But whether this new coronavirus exhibits such seasonality is far from guaranteed, Shaman said. “It may just continue through summer unabated,” he said. 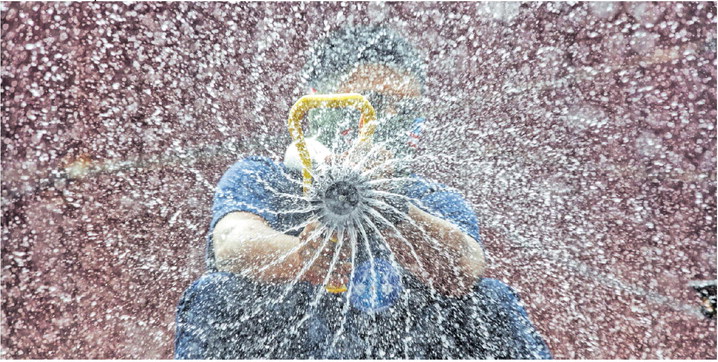 A worker sprays antiseptic solution to combat COVID-19 along a street in Manila, Philippines. Philippine President Rodrigo Duterte declared a state of public health emergency, as the number of people infected with COVID-19 in the country rose. With over 115,000 confirmed cases around the world, the coronavirus has so far claimed over 4,000 lives. Courtesy of Ezra Acayan, Getty Images