On April 4, 1865, Abraham Lincoln went to Richmond. With the Civil War all but won, the president wanted to tour the rebel capital. There, he met a Union general who asked how the conquered city should be treated. “If I were in your place, I’d let ‘em up easy,’” said Lincoln. “Let ‘em up easy.”

This was in concordance with his desire to, as he’d said in his second inaugural address, “bind up the nation’s wounds.” That magnanimity was not reciprocated, though. Ten days later, one of those Lincoln wished to let up easy shot him in the head.

But his generosity of spirit toward the traitors outlived him. The commanding general of the rebel army was never imprisoned or tried. The “president” of the rebel states did spend two years in prison, but then was released. He, too, was never tried. Meantime, the rebels themselves never stopped seeking to win as a practical matter what they had lost on the battlefield — the right to subjugate African-American people.

All that to say, “Let ‘em up” — a policy of profound benevolence, to be certain — has its limitations. And even its dangers. That’s worth keeping in mind as we grapple with the second most serious act of insurrection in American history — last week’s deadly storming of the Capitol building by disaffected supporters of Donald Trump.

While Lincoln, who had confronted the most serious such act in U.S. history, wanted to “Let ‘em up,” many Trump supporters have embraced a similar cry: Let him off. This, as the House prepares to make Trump, who exhorted the mob to violence, the first president to be impeached twice.

“We need to get America back on a path towards unity,” says Minority Leader Kevin McCarthy. “Impeachment would be a major step backward,” says Sen. Lindsey Graham. “It’s kicking when he’s down,” complains Rep. Darrell Issa, who calls Trump’s sedition a “misstep.” Numerous conservative pundits argue that impeaching Trump would only inflame the 74 million people who voted for him.

As if that was calm deliberation they displayed at the Capitol. The brazen gall of Trump’s enablers even at this late date, defies exaggeration. Particularly Issa, who, with zero evidence of malfeasance, crusaded a few years back to smear former Secretary of State Hillary Clinton with the tragedy of Benghazi. Surely, when these people go walking by, one hears a faint clanking sound, as of brass striking brass.

“Let ‘em up easy,” said Lincoln once upon a time. And we did. So easy that no stench of shame now attaches to an act of insurrection that left 750,000 Americans dead. To the contrary, almost 16 decades later, a Trump supporter felt empowered to march through the very Capitol building of the United States, hoisting the filthy battle flag of the rebel cause.

Does anyone sense repentance and accountability from Trump or his followers? Not even close. So let’s not be distracted by disingenuous moral appeals.

The world is watching. It must see every single rioter who can be identified prosecuted to the maximum extent of the law. And it must see Trump held to answer for his crimes, must see him punished — or else let us never again hold ourselves up as a beacon of democracy or a nation of laws. We let ‘em up easy once before and we’re still dealing with the repercussions. 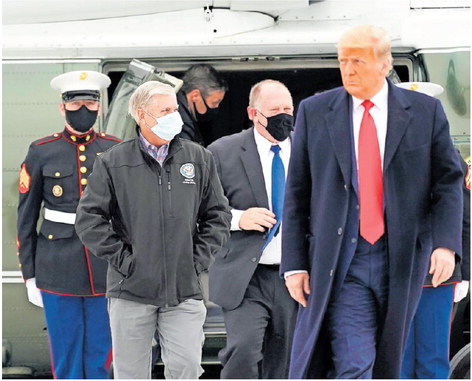 Sen. Lindsey Graham, R-S.C., left, walks with President Donald Trump as they board Air Force One upon arrival at Valley International Airport on Jan. 12, in Harlingen, Texas, after visiting a section of the border wall with Mexico in Alamo, Texas. Alex Brandon, Associated Press